‘Shape of Water,’ ‘Stranger Things 2’ and ‘Suspiria’
take top honors in 16th Annual Rondo Awards
‘The Art of Horror Movies’ is Book of the Year;
archivist Tim Lanza is Monster Kid of Year

ARLINGTON, VA. –  The Oscars, it turns out, were merely prelude as Guillermo del Toro’s gritty and romantic fantasy, THE SHAPE OF WATER, was voted Best Movie of 2017 in the (Gasp!) 16th Annual Rondo Hatton Classic Horror Awards.

SUSPIRIA prevailed despite the most classic horror restorations in many years, including James Whale’s OLD DARK HOUSE, the 1925 LOST WORLD, VAMPIRE BAT and CALTIKI.

The Rondo Awards, named after Rondo Hatton, an obscure B-movie villain of the 1940s, honor the best in classic horror research, creativity and film preservation. This year’s e-mail vote, conducted by the Classic Horror Film Board, a 23-year old online community, drew more than 3,700 ballots, the most ever in the largest survey of the classic horror genre held each year. 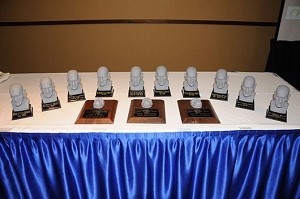 In other categories, voters named THE DEVIL’S CANDY, a heavy-metal chiller directed by Sean Byrne, as Best Independent Film.  Tom Woodruff Jr’s KONG: STEEL IN LOVE, a touching re-animation of the original King Kong armature used in the 1933 classic was voted Best Short Film. And MONSTER KIDS, a documentary by James-Michael Roddy about the professionals who were influenced by the classic monsters in the 1950s and 1960s, was chosen as Best Documentary.

Best article went to the 100-page exploration of FRANKENSTEIN: THE UNTOLD STORY by Sam Irvin in LITTLE SHOPPE OF HORRORS. Canadian magazine RUE MORGUE editor Andrea Subassati won Best Interview for her exploration of witches in cinema and reality.

Other winners included Dr. Gangrene’s column in SCARY MONSTERS, the birth.death.movies website and the Twilight Zone Podcast. MY FAVORITE THING IS MONSTERS by Emil Ferris was voted Best Horror Comic.

Tim Lanza, an executive at Cohen Media Group who was largely responsible for the stunning restoration of the 1932 OLD DARK HOUSE, was selected as Monster Kid of the Year.

Below you’ll find all the winners, along with runners-up and honorable mentions. Many categories were very competitive, and numerous nominees not listed here nonetheless drew significant votes.

Below is a photo of Hatton in the 1946 film, HOUSE OF HORRORS, which was an inspiration for the distinctive bust given to winners..

— HERE ARE WINNERS IN THE 16th ANNUAL RONDO AWARDS —

A record number of voters — more than 3,700 fans and professionals — made these choices in the 16th Annual  Rondo Hatton Classic Horror Awards for work in the year 2017. Here is a category-by-category breakdown of winners:

THE SHAPE OF WATER

Runner-up: GET OUT
Honorable mentions: WONDER WOMAN, IT,
BLADE RUNNER 2049

A SIGH FROM THE DEPTHS: 40 YEARS OF SUSPIRIA,
directed by Daniel Griffith

Honorable mentions: THE LOST WORLD (restoration of Ghost of Slumber Mountain);
THE OLD DARK HOUSE (interview with Sara Karloff);
THE LODGER (Hitchcock talks to Truffaut); TALES FROM THE HOOD (Making of)

Honorable mentions: WHY IS THERE CARDBOARD IN DRACULA?;
BURN; THE BLACK CAT; RAKKA; MASQUE OF THE RED DEATH

MONSTER KIDS: THE IMPACT OF THINGS THAT GO BUMP
IN THE NIGHT, directed by James-Michael Roddy

Runner-up: BATMAN AND BILL
Honorable mentions: YOU’RE SO COOL, BREWSTER: THE STORY
OF FRIGHT NIGHT; WHO GOES THERE: IN SEARCH OF THE THING;
KING COHEN; TO HELL AND BACK: THE KANE HODDER STORY

BOOK OF THE YEAR

THE ART OF HORROR MOVIES: An Illustrated History by Stephen Jones

Runners-up: RICCARDO FREDA: The Life and Works of a Born Filmmaker,
by Roberto Curti; NOPE, NOTHING WRONG HERE: The Making of Cujo,
by Lee Gambin; MONSTER SQUAD: Celebrating the Creators Behind Cinema’s
Most Memorable Creatures, by Heather A. Wixson; A WEREWOLF REMEMBERS,
by Frank Dello Stritto

‘The Epic Untold Saga Behind Frankenstein: The True Story,’
by Sam Irvin, LITTLE SHOPPE OF HORRORS #38.

Honorable mentions: ‘Battle of the Monster Makers,’ by Mark C. Glassy, SCARY MONSTERS #103;
‘The Great and Secret Showman,’ by Sean Plummer, RUE MORGUE #176;
‘The Future of Horror,’ by Nathan Hanneman, HORRORHOUND #68;
‘Caltiki, the Name Written in Tripe,’ by Tim Lucas, SCREEM #33;
‘Supernatural Folklore in the Japanese Ghost Film,’ by Kat Ellinger, DIABOLIQUE #26;
‘Less Is More: The Need to Return to Generic Horror,’ by Preston Fassel, HeardTell.com

The Doctor Is In-Sane, by Dr. Gangrene (SCARY MONSTERS) 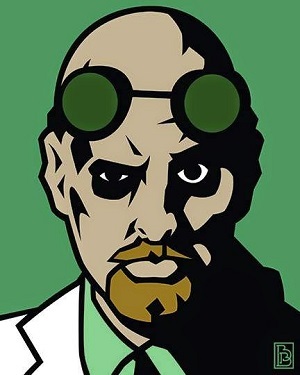 Honorable mentions: They Came from the Crypt, by Jon Kitley, HORRORHOUND;
SHOT IN THE DARK by Tim Lucas, DIABOLIQUE; Rondo Remembers by Ron Adams,
MONSTER BASH; Overlooked in Hollywood by Laura Wagner, GOLDEN FILMS
OF THE GOLDEN AGE

MY FAVORITE THING IS MONSTERS,
by Emil Ferris

WRITER OF THE YEAR

Few people know the secrets of Collinsport more than Patrick McCray, a Dark Shadows
expert whose contributions to the Dark Shadows Daybook keep horror’s enduring
scare opera alive for new generations. A writer who viewed 1,225 episodes in
45 days, he shares his obsession with Collinsport fans daily.
.

ARTIST OF THE YEAR

The dazzling artwork of Mark Maddox has become as familiar as the logos
of our favorite monster magazines. Whether giving a vibrant vibe to Ghidrah or
a somber take on Dracula, the Maddox touch is sure and steady.
No wonder his work is nominated for several covers each year.

The art of David G. Hardy flows naturally, capturing the hearts and torments
of our favorite monsters and supporting players. Whether casual sketches or
full-throated portraits, Hardy’s work is in the grand tradition of classic fantasy,
propelled by an exuberance of spirit that keeps his horrors…alive.

That’s Sonny Vento, now 87, appearing very briefly in 1953 as a
longshoreman in THE BEAST FROM 20,000 FATHOMS, just before
the Rhedosaur attacks. Vento helped his son, Joey, start the
Haunted Barn Movie Museum in New York, which since 1968 has
displayed monster props and shown movies to kids young and old.
Says Joey: “When we do our Monstrous Movie Memories Show displays,
we always do a tribute to dad.”
We at the Rondos are delighted to honor a Greatest Generation Monster Kid!

MONSTER KID OF THE YEAR

A vice president at the Cohen Media Group, Tim was the driving
force behind the restoration of James Whale’s OLD DARK HOUSE
on Blu-Ray. Working his industry contacts for years, he finally got access
to a Library of Congress copy for a 4K restoration. Classic horror fans
now have the 1932 film as it was meant to be seen. The Rondos are
honored to select Tim Lanza as our Monster Kid of the Year,

THE MONSTER KID HALL OF FAME

June Foray was quite literally the voice of several generations,
the voice artist behind Rocky and Bullwinkle, Looney Toons, Hanna-Barbera,
Disney and scores of commercials and films. Passing away last year at the
age of 99, her legacy lives on to the delight of our children and grandchildren.

Taking the tradition of horror hosts to sexy and hilarious
heights, Cassandra Peterson’s Elvira character never
forgot the dignity of the films she lampooned. For 30 years
she’s kept forgotten horror franchises alive. One of the genre’s
true pioneers.

In a world of suits and balance sheets, it’s rare that
someone who gets it takes charge of a horror franchise
as important as THE WALKING DEAD. A trailblazing
makeup and effects artist, Nicotero’s deft directing touch
keeps the show at the cutting edge of 21st Century storytelling.
His work will be a guide for generations of  filmmakers to come.

In a world of collectors, few can compare with Robert Taylor,
whose rooms of show business memorabilia from the early
1900s to the fright films of the 50s is a living museum. With access
to Forrest J Ackerman’s writings and Vincent Price artwork, Taylor
is a master of ephemera that matters. In addition, his years of serving
as Sara Karloff’s aide de camp at conventions and elsewhere have
kept icons available to fans and researchers. Shown above with Victoria
Price and Karloff, Robert is a true gentleman of the genre.

For decades he was the anonymous man in the Godzilla suit, walking
silently through miniature cities. It was hot in the suit, he said later,
sometimes he was injured. But Haruo Nakajima never
faltered as he kept Toho’s monster franchise on schedule.
Late in life fans learned his names and flocked to him at conventions.
When he died at age 88, Nakajima knew that in his own way, he was a star.

Mike Hill’s lifelike sculpts of famous monsters can take your
breath away. Full-size and detailed down to the tear on
a teenage werewolf’s pants leg, Hill’s work reveals the humanity
in even the fiercest of creatures. His work on the merman in
THE SHAPE OF WATER shows his Hollywood  influence has only just begun.

And there you have it. Whew!

None of this would be possible without the thousands of you who voted, or
convinced others to vote. And the bedrock of it all remains the Classic Horror Film Board.

If you want to comment or react to the awards — or suggest nominees for next year — visit the CHFB’s Rondo Forum.

A Rondo Awards Ceremony will be held at the WonderFest Convention
in Louisville on Saturday, June 2, 2018.

Many of the winners will attend or send
videos. Keep track of Rondo doings at classichorrorfilmboard.com or at rondoaward.com.

And remember the words of Zacherley: 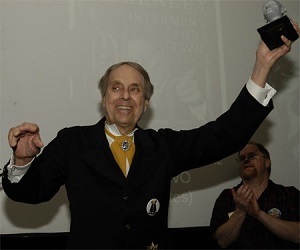 ‘Good night, whatever you are!’

This year’s awards are dedicated to Basil Gogos, George Romero and Haruo Nakajima

1. BEST MOVIE OF 2017
— ALIEN: COVENANT
— ANNABELLE: CREATION
— THE BLACKCOAT’S DAUGHTER
— BLADE RUNNER 2049
— COLOSSAL
— CULT OF CHUCKY
— A CURE FOR WELLNESS
— GET OUT
— GUARDIANS OF THE GALAXY 2
— HAPPY DEATH DAY
— Stephen King’s IT
— IT COMES AT NIGHT
— JUSTICE LEAGUE
— KONG SKULL ISLAND
— LIFE
— LOGAN
— MOTHER!
— THE MUMMY
— THE SHAPE OF WATER
— STAR WARS: THE LAST JEDI
— SUPER DARK TIMES
— THOR RAGNAROK
— WAR FOR THE PLANET OF THE APES
— WONDER WOMAN
— Or write in another choice:
2. BEST TELEVISION PRESENTATION OF 2017

— THE UNDEAD: Having an Undead Summer (EP)

— VAULT OF HORROR: The Italian Collection (Demon Records) 20 tracks from 70s and 80s.

27. INTERNATIONAL FAN OF THE YEAR

28. MONSTER KID OF THE YEAR (Who did the most to advance the cause of classic horror scholarship, film preservation or genre fun).

29. AND FINALLY, THE MONSTER KID HALL OF FAME

— Which fans, pros, writers, researchers, horror hosts or others should be inducted into the Rondo Awards Monster Kid Hall of Fame?

Suggest up to six names of folks who have helped fandom grow.

Previous inductees are listed alphabetically below.

*Ackerman (1916-2008), recently has been accused of past sexual harassment. His induction in 2003 recognized the pivotal role of Famous Monsters magazine, as created by Ackerman and James Warren.

Whew! That’s it. Remember, you don’t have to vote in every category and write-ins and comments are accepted.

REMEMBER TO INCLUDE YOUR NAME; E-MAIL YOUR PICKS TO taraco@aol.com

AGAIN, TO VOTE simply copy this ballot and make your picks by highlighting your selection, or by putting an X by your selections, or by typing out your picks separately. We know the ballot is awkward, but a simple cut-and-paste into an email works fine.

And if you gotten this far, you are a true Monster Kid! Thanks.

This year’s Rondos are dedicated to the monster artist supreme, BASIL GOGOS, to the first director who really scared us, GEORGE ROMERO, and to the man inside the monster suit, HARUO NAKAJIMA. Long may their memories fill Monster Kids with joy, shivers and wonder.